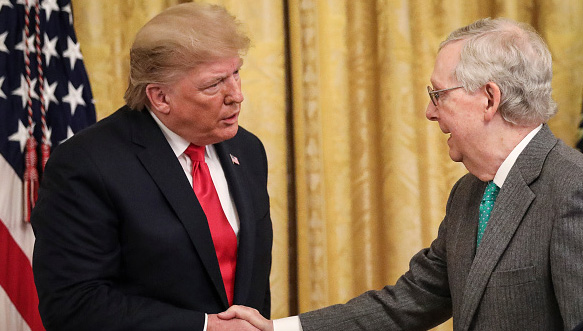 President Trump held an event at the White House to celebrate the recent milestone of the 150th judge appointed to the federal bench. By the end of that week, the Senate is expected bring the total number of confirmed judges to 161. President Trump has appointed more circuit judges by this point in his presidency than any president in recent history. About 1 in 4 judges on the U.S. Court of Appeals are Trump appointees. “In recent decades, our system has been under relentless attack by the left-wing activists who want to take the powers of the elected branches and give that power to unelected federal judges,” said President Trump. “They want to impose by judicial decree what they fail to win at the ballot box.”

You can read the whole story on The Daily Signal.

Posted in Judiciary, News & Current Events and tagged
← Vatican envoy tells U.S. bishops to get in line with Pope Francis in ‘bomb-drop’ address1 in 3 US bishops at fall meeting vote against calling abortion ‘pre-eminent’ issue →
Scroll To Top