A general of the king’s army wanted to rule the whole land himself, so he rose up against the king with a large number of soldiers. The battle lasted a long time, but the rebel general was finally routed and fled with his family into another country.

The general was very unhappy in exile, trying to live with the shame he’d brought on himself and his family. Dressed like the beggar he’d become, he went back to the palace and entered the hall where the king held audience. He walked to the royal throne holding the king’s own two year old child in his arms. The rebel general approached the throne, knelt before the king and said, “Your Majesty, I’m the general who fought against you and wanted to take your life. I, as well as my wife and children, deserve to be put to death for my crime. But for the sake of this little boy, whom Your Majesty loves, I beg you to spare my family and me.”

There was silence in the hall. Everybody wanted to hear what the king would say. The king stood, and with a stern look began to speak. “Yes, you and your whole family deserve to be put to death because you have been a traitor. But because you ask me to spare your life for the sake of my little son, I cannot refuse your request. I love my son and cannot refuse him anything. For his sake, then, I not only pardon you and your wife and children, but I shall also bring you all back to my palace to live with me in even greater honor than you had before.” 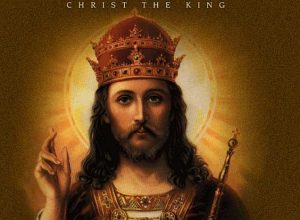 Holy Sacrifice of the Mass

This is what happens every time we go to Holy Mass. We’re like the traitorous general who offends God with our sins. But because we offer the Son to the Father at Mass and beg for mercy for the Son’s sake, the heavenly Father can’t refuse our request, because it is Jesus Himself who pleads our case.

Knowing this truth, any person who is grateful to the Father is certain to want to show God the proper signs of respect He demands through His Holy Church. There are many abuses that have crept into the laity’s participation of the Mass, but thanks be to God they are minor compared to other abuses we’ve discussed. And some things where the laity are connected to the Mass are merely misconceptions. Still, we owe God all the proprieties as our sign of respect and to help us remember the great mystical event taking place when we attend the Holy Sacrifice of the Mass.

Let’s begin by clearing up one common misconception. I hear Catholics say all the time that they went to church to celebrate Mass. Frankly, it’s not possible for us to celebrate the Mass. Only the priest celebrates Holy Mass. We lay people participate in that celebration, but we can’t actually do the celebration; that is for the priest alone.

Another misconception has to do with what we do when we enter the church. Firstly, bowing is not the proper posture for entering the church. We are to genuflect, unless we have a physical limitation that prohibits us from genuflecting. Then it is appropriate to bow. And we are not, contrary to what seems to be a popular belief, genuflecting to the altar. The only time our focus is on the altar is when Jesus is on it. When we enter the church and genuflect, we are genuflecting to the King of kings in the Tabernacle. It has always amazed me to see people genuflect on Good Friday… when Jesus isn’t even present. Some say they do it out of habit and know better. That is understandable, but most actually don’t know better. I once attended Mass at a cathedral where the bishop had moved the Tabernacle off to the side, displacing it from its most proper place at the high altar. When people came in, they still genuflected to the altar instead of the Tabernacle. This made it obvious they don’t know why they’re genuflecting.

Why do we genuflect at all? We genuflect to show His Majesty our respect, love, reverence, and to acknowledge Him as our Lord and Creator. After all, it’s a little hard to believe in the Real Presence of Christ in the Holy Eucharist and not pay Him homage.

In the missalettes that are so common in parishes today, as well as in missals and the priest’s sacramentary, there are what are called rubrics. These rubrics are instructions on what is to be done and at the proper moment during Mass. They are complete in the priest’s sacramentary, as they come from an ecclesial document referred to as the GIRM—General Instruction of the Roman Missal. They are reasonably complete for the laity in most missals and missalettes, but downright incomplete in some of them. These rubrics are there for a reason: so we can give God the worship Holy Mother Church insists we give Him. St. Therese of Lisieux, also known as the Little Flower, said that she would die for even one rubric of the Mass. This popular saint said this to show us the importance of those rubrics.

When readers go to the pulpit to read, I often hear them ad lib the introduction to the reading. That is wrong and shouldn’t be done. They should read only what is there.

The people often read along with the reader, which is perfectly all right. What is not all right, though, is reading the Gospel when the priest or deacon is reading it to the people. Why? Because at this point we are hearing Jesus proclaim His good news through those who have received Holy Orders acting for him. Instead of reading along, we should have our attention focused on the priest or deacon.

When we recite the Creed, there is one thing required I hardly ever see anyone do anymore. The Nicene Creed says, “For the sake of us men and for our salvation, He came down from heaven, was made flesh by the Holy Spirit from the Virgin Mary, and became man…” It is during this sentence we are required to bow, except at Christmas when we kneel. The reason we do this is, we are paying homage to the fact of the Incarnation; that is, when God became man.

There are two things people frequently do during the Our Father that shouldn’t be done: holding hands or holding their hands out with their palms upward. There is absolutely nothing in the rubrics that authorizes these practices, and they are abuses that crept into the Mass during the rebellious ‘70s. Besides, the gesture of palms upward is a priestly (not lay) gesture, symbolizing the prayers of all the people going through the priest to heaven.

Finally, there is the Sign of Peace. You see, Jesus is already on the altar at that point, so our focus is on Him, not one another. The proper way to perform the Sign of Peace is to turn to the person on each side of you, gently grasp the other person’s hand, and say, “Peace be with you.” We are not to turn around to the people behind us, wave to people across the church, or leave the pew to go to others. When we turn around to someone else or leave the pew, we’re turning our back on Jesus. And we are most certainly not to kiss or hug someone, as that is most inappropriate… in any public venue. The focus at the Mass is Jesus, not other people.

Got a question?  Go to JoeSixpackAnswers.com