As a former Protestant and the son of a real “man’s man”, I grew up with a view of manhood that is, thankfully, very manly. I grew up hunting, fishing, spending a lot of time in the forests where I grew up. The old man taught me to stand up for myself at an early age, but not to be a bully. Indeed, he taught me to have pity for and to defend the “underdog”, as he would call boys he considered weaklings. Consequently, nobody messed with me more than once.

Anti-Catholic that my father was, he believed priests simply weren’t “real men”. He believed any man who didn’t marry was… well, you know the kind. An unfortunate reality over the past decade is, it turned out that some of our priests were exactly what Dad thought all of them were. I won’t bother to get into the reasons why we ended up with priests who possess the disorder of homosexuality, but there’s no denying the fact that we had some who were. Thanks be to God, the Holy Spirit finally cleansed the priesthood of this scourge, because it truly gave the priesthood a bad reputation; one that our priests will have to try to live down for decades.

Looking over what I just wrote in the previous paragraph, it occurs to me that I just described the priesthood. The priest in my parish, as well as a number of priests I’ve known in my life, fits this description perfectly. 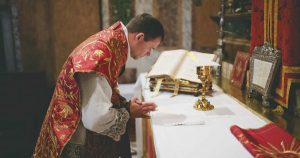 As you may have noticed, I know and have known a lot of stories that relate well to the subject matter about which I am writing. Sometimes, though, I can’t recall necessary details. Such is the case in what I’m going to relate now. I simply cannot recall the name of the saint for this story, and can’t seem to locate him in any of my resources, but there was once a priest saint who could see his guardian angel. While attending seminary, the saint would walk everywhere with his angel while they talked. When they came to a door or gate, the saint would always open the way for the angel to enter first.

On the saint’s ordination day, the day he received Holy Orders, the new priest and his angel came upon a gated fence. When they began to walk through the gate, the angel opened it for the saint. Puzzled, the saint asked why he should allow the angel to open the gate for him. The guardian angel replied, “Today you are a priest of the living God. You possess something greater than all my gifts. You deserve this honor.”

That is how we should all view our priests. A priest is a man who possesses powers and a certain dignity that you and I will never possess. It is through his intentions and actions alone that God removes the stain of sin from our souls in the confessional. It is he alone who  commands the God of the universe to come down from heaven into his hands… and God obeys. It is from the actions and intentions of the priest that we maintain life in our souls, just as food and water maintain physical life for our bodies. For this reason, it is proper to bow when a priest walks by, or to kiss his hand when he offers it in friendship. This sometimes embarrasses a priest, but not one who understands his own priesthood.

Some priests actually become angry when you show these signs of respect, signs that were common among the laity a couple of generations ago. These priests simply need to be reminded of what they are. I recall one jerking his hand back when I tried to kiss it, then loudly chastising me for doing so. As others looked on, I took his hand and drew him close so I could speak into his ear. I reminded him of the dignity and privilege of his priesthood, much like the way I described it above. I ended my soliloquy with, “You are a priest of the living God; act like it.” Then he allowed me to kiss his hand without protest. Yes, sometimes priests, just like the rest of us, need to be reminded of who and what they are. They are, after all, mere men, but they are mere men who God has called to be His representatives among us all.

“Holy Orders is the sacrament through which the mission entrusted by Christ to his apostles continues to be exercised in the Church until the end of time: thus it is the sacrament of apostolic ministry. It includes three degrees: episcopate [bishop], presbyterate [priest], and diaconate [deacon].” (Catechism of the Catholic Church, 1536)

“Only a baptized man (vir) validly receives sacred ordination. The Lord Jesus chose men (veri) to form the college of the twelve apostles, and the apostles did the same when they chose collaborators to succeed them in their ministry… The Church recognizes herself to be bound by this choice made by the Lord himself. For this reason the ordination of women is not possible.” (Catechism of the Catholic Church, 1577-1578)

The male candidate for the priesthood must be a good Catholic, prepare himself by the necessary studies, have the intention of giving his life to God’s service, and be accepted by his bishop or a religious superior for ordination.

Got a question?  Go to JoeSixpackAnswers.com.

Posted in Holy Orders, Priesthood and tagged
Reasons to Visit… →
Scroll To Top