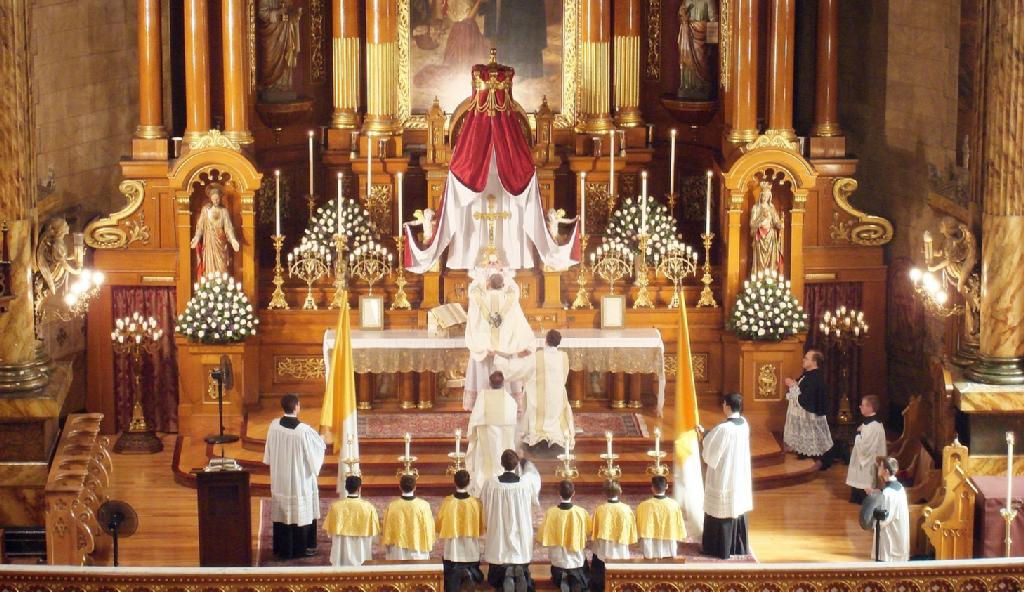 Throughout this series on proper comportment for the Holy Sacrifice of the Mass, we have focused on what the rubrics and the GIRM have to say.  In this final installment, though, we will focus on other things.  Actually, I consider myself herein to be a spokesman for Mass participants in general.

Nearly all of us love children—I know I do.  As the father of four, I can honestly say being a parent defined my life and made it special.  But society and global realities were different then than they are now.  Indeed, the changes in families have been so drastic between the time of my own childhood and now that I find it difficult to even recognize the world today.  Of course, when I was a kid dirt still had a shine to it.

When I was a kid, my father ruled his household with an iron fist.  If I had treated my children the way he treated me, the police would have certainly arrested me and a judge would have sent me away for a while.  And a judge would have been right in doing that, as my father was a wee bit too harsh.  But in those days, law enforcement stayed out of “family matters” unless a family member filed a complaint.

Not so anymore!  In all jurisdictions, signs of child abuse are dealt with quickly and with extreme prejudice.  In some jurisdictions, spanking a child is considered child abuse, and dealt with accordingly.  In a few jurisdictions, even speaking harshly to a child, or disciplining him at all, is considered child abuse.  Contrary to what a famed politician says, rearing a child does not take a village.  To say such is merely PC speak for the nanny state trying to tell parents how it thinks they should rear a child.  But nothing could be farther from the truth—morally, philosophically, and logically.

The constant teaching of the Catholic Church has been that parents are the primary teachers of their children.  This applies to the children’s academic development, moral formation, character formation, and religious formation.  These things are none of the state’s business.  The only legitimate role of the state is to protect a child from real harm—not the perception of harm as the nanny state defines it.

The interference of government in family affairs has given society parents who are either fearful of disciplining their children, or they have been brainwashed into the false belief that it does indeed take a village to rear a child.  This has also resulted in a generation of rude, self-centered, unruly, undisciplined children who openly demonstrate a blatant disrespect for their parents, elders, contemporaries, and the Church.

It is past time to change all that!

The Bible, and thus the Church, instructs us as to exactly how we should rear our children.  St. Paul writes, “Children, obey your parents in the Lord, for this is right.  ‘Honor your father and mother’ (this is the first commandment with a promise), ‘that it may be well with you and that you may live long on the earth’” (Ephesians 6:1-3).  The operative words here are, “Honor your father and mother.”  Okay, but does a child automatically know about that when they pop out of the womb?  Of course not; mom and dad have to teach them such things.  And Paul talks about that too.

“Fathers, do not provoke your children to anger, but bring them up in the discipline and instruction of the Lord” (Ephesians 6:4).  Here’s where it gets interesting.  First, it’s apparent that many fathers—maybe even a majority—have abdicated their legitimate authority over the affairs of their children to the mothers.  Frankly, I wouldn’t want to be one of those fathers on Judgment Day.  Second, we need to realize what this passage is actually telling us.  Many people seem to think that disciplining their children will lead to children’s anger.  Wrong!

By their very nature, children actually want to be disciplined, want to be told what to do, want boundaries set for them, and want to learn the right way to behave.  When a parent fails to do those things with their children, they actually do cause them to anger—as demonstrated by way of the children’s acting out behavior.

So what does this have to do with participating in the Holy Sacrifice of the Mass?  More than you might imagine.  I’ve heard parishioner after parishioner in every parish I’ve been to complain about loud, distracting, unruly children at Mass.  People go to Mass to worship God, not to be distracted by “cute” children.  You may have the cutest children in the world, but if they’re distracting worshippers from giving God His due… well, there’s nothing cute about that.  And the children can’t be blamed for being kids and doing what comes natural to them, but mom and dad can certainly be blamed for the distractions caused by those kids.

If you have children who are distracting worshippers, the remedy is to discipline your children.  There is no excuse for children being unruly during Mass.  Your child should be taught there are consequences for bad behavior.  Don’t bring coloring books, story books and finger foods to Mass to occupy your child.  If your child is old enough for those things to be effective, begin teaching him or her about the Mass.  Don’t sit in the back and hope your child behaves.  First, make sure your child understands unruly behavior will be punished, then sit up front so you can explain to the child what is going on and what’s expected of him or her, and (if necessary) use a good children’s Mass book to aid you in that explanation.  In a simple Google search, I found six sources and about two dozen Mass books for kids on just the first page of the search—books they can have to learn the importance of the Mass and how they can participate and feel like they’re a part of what’s going on.

There is another thing to consider here.  As a parent, I know children are always better behaved in public than they are at home.  Based on what I witness on a regular basis, some of the ill behaved children at Mass must be absolute terrors at home.  If firm and consistent discipline isn’t administered when they’re little, you will know genuine heart ache when they’re older, because you’ll be turning them over to the state by way of a judge to live in a much bigger house than they’re growing up in now.  In other words, prison and a ruined life will be in their futures.  Your tax dollars will provide a disciplined environment for your grown child later if you don’t provide a disciplined environment for them now.  I’ve worked in prison apostolate.  Believe me when I tell you that you don’t want to be responsible for condemning your child to such a draconian end as that.

Remember that the Holy Sacrifice of the Mass is the re-presentation of Christ’s sacrifice to the Father—the highest form of worship there is.  Everybody there is present for one purpose and one purpose alone—to worship Almighty God.  Everyone has a right to be able to do that without undue distraction.  And you have a moral obligation to both make sure your child is not a distraction and that the child understands and worthily participates in the Mass.